Maybe it’s a feeling of nostalgia, maybe it’s wandering down the Transformers aisle in the supermarket toy section, maybe it’s the need to round out my science-fiction gaming genre collection: I realized there are no rules out there for giant mecha combat in USR. Here’s a few guidelines for your game. To start with, giant mecha (or mechs) in these rules refer mainly to the Transformers (G1 especially) and old-school, FASA Battletech. I don’t watch much anime, and I can’t say I was really impressed by “Pacific Rim” either, though I like the concept. It should’t be hard to take your USR mecha game in any direction you like, though. 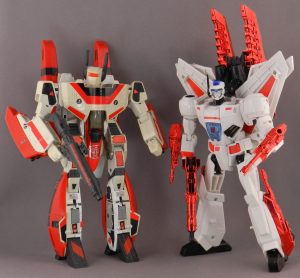 Call him Jetfire, call him Valkyrie, any name is fine. (image: tfw2005.com)

The biggest change is probably not what you’re thinking: mecha, though more powerful than ordinary humans (say, Rick Hunter from “Robotech” or Sam Witwicky from “Transformers”), don’t use the superhero tiers rules. Humans can’t possibly compete with a mecha, with one exception — if you stretch the definition of mecha to include robot suits, like Iron Man or the Space Marines of Warhammer 40,000, which we’re not doing here. If you want a Transformers-style game, every character is created using the regular Domino Writing-style USR rules… they’re just giant robots. If you want a Battletech game, where the humans are the ones with stories and the mechs are just gigantic weapons platforms, you can do that too. It’s best in that case to make one human character, the pilot of a mech “character” you also create.

It’s the game master’s call on what each character can do; a mecha can’t pick a lock, while a human can’t change shape into a car. That’s why you need both characters to simulate a lot of mecha fiction. The main way they interact in the rules is in damage. Combat is calculated normally for mecha-to-mecha or human-to-human fighting. But when they mix and match:

Mecha attacks human: double the damage the human suffers.
Human attacks mecha: if the human’s attack total minus the mecha’s defense total is 5 or less, it does 1 damage to the mecha. If it’s 6 or more, it does 2 damage.

Destroyicon narrowed his optic sensors at Jack. “Get out of my way, puny human,” he growled, his voice rumbling the rocks beneath Jack’s feet.
“No way!” Jack shouted. “This is for the Herobots!” He squeezed the trigger on his laser pistol.
An Action roll of 6 +2 for his pistol is an 8. Destroyicon’s defensive Action roll is a 4 +2 for his Villitron armor plating. Jack’s 8 minus Destroyicon’s 6 results in a 2, enough to hit for a single point of damage.
A scorch mark seared the giant robot’s leg. He laughed coldly. “My turn, fleshling,” he said, and swung his energy sword.
This time, Destroyicon rolls a total of 10, and Jack’s total is 6, for a hit and a difference of 4. Doubled, Jack takes 8 points of damage.
Jack looked around frantically for the Herobots.

The Transformers change shape normally. That doesn’t call for a die roll, but you can represent their “alt mode” as a Specialism. Optimus Prime, for example, has a “Transforms Into Semi-Truck” Specialism, while each of Voltron’s pilots has “Voltron Form” as a Specialism. Keith, Pidge, and the rest are the heroes, and joining into Voltron is an action that doesn’t call for a roll. The weapons and special abilities of Voltron do require a roll, though, by whoever is taking their turn at “controlling” Voltron.