I very rarely write articles on controversial topics, or dig into the important news of the day. That’s not the kind of writing I do — it’s not what most journalists do, now that daily news is available through so few sources. Instead, I write feature articles on interesting trends and businesses in my community. It seems like it would be easier to get people to talk about themselves and their work that way, since I’m, in a sense, promoting them and letting more people know about what they do. But even in that case some people don’t like talking about themselves. Others ask, after talking for 20 minutes or more, if they’ve said too much. I always answer, “The more you give me, the more I have to work with.” Which is true. 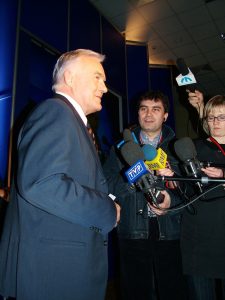 Here are a few ideas on how to interact in an interview.

You will be quoted.

When a writer is working on a feature story, like the ones I write, or when a TV, radio or internet personality is interviewing you, they’re not your enemy. They want to get you to talk as much as you want to promote yourself. If you don’t want to talk with them, why did you agree to have a conversation? Be aware that what you’re saying can be included on a broadcast or in an article.

If you have something to say about the topic of the article that the writer didn’t think of, go ahead and say it! It can lead to more questions that can make the article (and its subject, you) more interesting. An interviewer should do at least a little bit of research before they approach you, but you’re the one who knows the most about the topic; that’s why you’re being interviewed. Answering questions with a “yes” or “no” doesn’t help anyone.

Clear away the ignorance.

One technique that’s been successful for me is to act like I know very little about a topic when I approach someone. That contradicts what’s above, that interviewers should do research ahead of time, but in this case it’s more like getting the same information twice. A writer can listen to a musician’s new album and describe the sound of the album, and the songs they like best, but it’s a different experience when the musicians themselves describe how they wrote those songs and recorded them.

Several years ago, I wrote about a new church in town (which has since shut down, unfortunately). Everyone knows what a church is and what it’s for, so instead I asked what made the church unique: how did this specific group of people come together and start a new church? Why did they leave their old churches? Why should someone — say, a person reading the article — want to come to the new church? By acting like I didn’t know anything about the church, I gave my interview subjects a chance to explain themselves, and do a little thinking about their own motivations for being there. The church had a mission statement written on paper, which is a place to start, but mission statements are usually dry and wordy. Asking people about themselves, about what gets them excited about whatever it is we’re talking about, gives you real answers… ones you want to write about, and you want your readers to see.