Cowboys and gunslingers is one of those sub-genres that hasn’t had too much of a history in the RPG realm, aside from the Weird West of the “Deadlands” RPG. The original tabletop western RPG is “Boot Hill” from TSR, and most of the generic game systems have had their own western component, from Rolemaster’s “Outlaw” to GURPS “Old West.”

USR is no different; Western USR has been out for several years. Today’s post isn’t throwing anything that came before it away. Instead, it’s just blending the old with the new. Well, new in reference to things on this blog. There were Quick Draw rules and some rules for Guns. 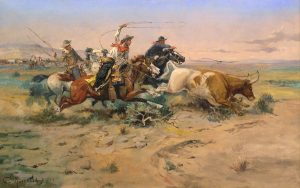 Ropin’ a steer is an attack roll, too. (image: public domain)

As always, a weapon provides a bonus to attack rolls. Using the Quick Draw rules, it also has a penalty to a character’s Initiative. Here’s the list again, scaled down to classic western weapons.

A gatling gun has a +2/+1 attack bonus, and dynamite follows the gun rules from earlier in this blog except it uses a D8 instead of the modern explosive’s D10.

A horse gives its rider a +1 to Action rolls when riding is involved — chases, stunts — or maybe a +2 for that perfect mount.

And that leaves us room for an adventure for our band of desperadoes or lawmen (or even magic-using card players or steampunk gadget-makers, if you like).

There’s gold in them thar hills! At least, there was, until the Black Jacks, a gang of ruffians led by Black Jack himself (his Ego is a D12, and would be higher if he could), stole a half-dozen wagonloads of bullion and took it somewhere. That’s all the old prospector can tell you, even after you buy him a drink.

The mayor and the banker don’t know where the Black Jacks are. Nobody really wants to talk about the gang in the town of Patience, even after you rescue the mayor’s daughter from a pack of ravenous coyotes (these could be actual canines, or demon animals, or even a rival gang of thugs).

At the hoedown the evening after the heroes rescue the mayor’s daughter, she says she knows something about where the Black Jacks are: she overheard some of the town’s elders talking about needing money to solidify a deal with Duke Abbey, an English nobleman who’s been to town a few times before.

Investigation of bank records and the mayor’s papers reveal a letter describing a meeting between the Duke and Black Jack in two days, at the old mine two days’ ride from town.

5. Secondary challenge or encounter (the opposite)

The journey to the mine is loaded with trouble, from a flash flood that turns to a mudslide to an angered grizzly bear wandering into camp.

Arriving at the mine in time for the meeting, the heroes find Black Jack and his gang, the Duke (who has a few deadly gadgets in his sword-cane), and the mayor himself, who never told his daughter about the gambling debts he owes to Black Jack. Jack can have as many lieutenants as he needs to make sure every player character gets to have a quick draw showdown.