One of the things I like best about USR is the balance between a quick, rules-light narrative role playing game system and the “crunchy” rules sets of bigger games. Though Specialisms are meant to be very flexible, the rules around them provide more structure than games like Risus or Apocalypse World. At the same time, USR doesn’t demand a page full of numbers, like Pathfinder or the Fantasy Flight Games Star Wars systems.

With Narrative Points, USR joins the ranks of games like Fate (Fate Points), Savage Worlds (Bennies) and even Fifth Edition D&D (Inspiration) in providing an option for players to have a more direct impact on the story, either by affecting die rolls, or in some cases outright changing the game master’s description. 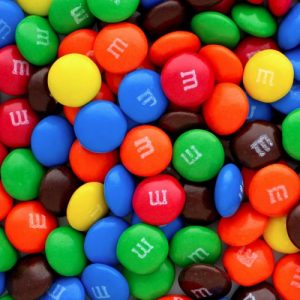 Don’t use these to track your Narrative Points, you could eat them before they’re spent. (image: candystore.com)

In Domino Writing-style USR, Narrative Points can do four things, as listed on the character sheet:

1. Add to or change a scene the game master has described.

This is very flexible, definitely on the rules-light side of things. There’s no hard and fast rule, but a good guideline is that it should encourage the story. This use of Narrative Points isn’t to affect die rolls, but to (usually) make the situation more advantageous to the heroes.

If a thug successfully shoots your hero, the game master shouldn’t allow you to use a Narrative Point to say he missed (the dice already show that he hit). Instead, the police could show up — or just be heard in the distance, depending on the story the game master wants to tell. You could even spend a Narrative Point to say after that shot, the thug’s gun jams. He doesn’t run out of bullets, in case the game master wants the thug to attack again, but the moment or two while the gun is jammed may be enough for the heroes to make another plan.

Or imagine the heroes are trying to escape out of a building while guard dogs (or security robots) chase after them. They’re deep in the building and need a place to hide. Spending a Narrative Point, one character “suddenly” discovers a storage room where the heroes can huddle in the dark until the threat passes. A Narrative Point probably wouldn’t be used to “suddenly” find a door out of the building, on the other hand, since that could bring an abrupt end to the game — what if the heroes were supposed to be caught, or what if escaping the building means the adventure is over, and game night still has two hours to go?

This option also needs to be examined carefully by the game master, because it too can end an adventure right away. It’s a good way to speed up to more exciting parts of the story.

It can also be helpful to avoid danger, like automatically crossing a swinging rope bridge, or to speed up time, like finding an important clue in the university library before the campus cops show up, wondering why there’s a group of heavily armed men walking past the shelves.

No one wants to miss, of course, but because damage in USR is dependent on the attack and defense rolls, you don’t just want to roll good enough, you want to roll as high as possible. There’s no limit to the number of Narrative Points you can spend at one time; spend a bunch to keep “editing” the scene until that bullet hits the bad guy in just the right way.

Though Domino Writing-style USR allows for more starting Hit Points than regular USR does, an action-adventure story will always come with the risk of injury and death. Remember to describe the way those Hit Points are being recovered. Is your hero stopping to catch his breath? Is he grabbing a nearby first aid kit? Is he taking a break for a refreshing afternoon snack? Mechanically, adding Hit Points is a simple procedure, but it too can be a fun part of the narrative of the game.

As always, game masters have the final say, and as always, it’s more fun if the game master and players come to an agreement that makes for a more enjoyable story.

Narrative Points start with three, and you and add more if you don’t spend all your Combat Gear points, and even more if you’re using superhero rules and are at a different Tier than the base level of the game.

You regain your starting amount at the beginning of each game session, but you can also get them back during the game. How? We’ll look at that next time.

How do you use Narrative Points in your game?