An ordinary character can be created, though most characters will have Action as their highest stat. But a player who wants to try something different, like a wrestling manager or a Vince McMahon-style macho businessman, could take Wits or Ego as the highest stat.

Combat Gear points don’t really apply in the setting; wrestlers grab chairs but don’t have one as a primary weapon. A fighter like “Mortal Kombat’s” Scorpion does have his “Get over here!” spear, but that’s not a weapon, in USR tournament fighting. Instead, it’s a Combat Maneuver. Characters typically have one +1, one +2 and one +3 Combat Maneuver, and the another single Combat Maneuver of any bonus, selected when they’re created. A heavy hitter might have two +3s, while a fast character has two +1s, staying in the fight for a long time by moving around swiftly. In game terms, there’s no difference between one +1 attack and another; that’s where your creativity comes in… although the narration can affect your attacks — if a character’s hands are tied, he can’t throw a punch. Name your attacks something interesting and action-packed.

In addition, all characters start with these two Combat Maneuvers.
Punch (could also be a kick or even head-butt) +0: in other words, a basic Action die roll.
Block: if your character chooses a block, he doesn’t attack on his turn, but until it’s his turn in combat again, he can make his defense die roll twice and use the best result. This gives the character no Strain — but he doesn’t recover Strain either (see below for more on Strain).

Body Slam +2
Force Field +2 (this is for defensive rolls, not attacks)
Spin Kick +2
Summon an ally (to make a sudden attack, then disappear) +2 (this uses Ego instead of Action)
Throw +2
Uppercut +2 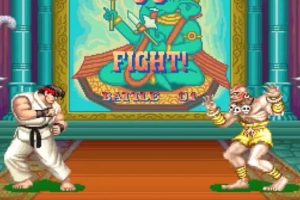 I could go either way on this fight, really. (image: Capcom)

An attack roll that gets the highest result on the die (for example, a 10 on a D10) starts a combo. The attacker can continue to make attacks, as long as they are on the same target as the first attack, and as long as each one hits. When an attack misses, the combo is over. In this setting, everyone has roughly 15 Hit Points, like a typical player character, to keep them in the game for a while, and to give heroes someone to try and score combos on.

Sure, you can simply create a few tournament fighters or wrestlers, set them up in a playoff bracket-style showdown, and duel it out. But there’s more to the setting than fighting, believe it or not. Think of “Street Fighter’s” struggle against M. Bison, or the romantic storylines of WWE. While you’re thinking about what to call your character’s Combat Maneuvers, don’t forget they have Specialisms too. Even professional warriors have interests and skills — maybe your hero is a Spy, an Expert Pilot, or an Anthropologist who found another hero, a strange man-monster, deep in the Amazon jungle. Perhaps the hero is a former champion passing along his knowledge of Tournament History to the younger characters, or is Suave (or Wealthy) enough to impress non-player characters unimpressed with his talents in the ring.