The way to earn Narrative Points in a USR game is simple: have fun with the game while you’re playing it. Years ago, I ran a game of Toon, where I awarded a Plot Point (that game’s equivalent of Narrative Points) to one of my players for something I found funny. Toon, as the name suggests, is all about being cartoony, but my players took it the wrong way, deciding that the way to “win” was to get me to laugh so they could collect Plot Points, instead of telling an entertaining tale. The moral of that story is to hand out Narrative Points often, so players see that they’re available for just about any reason, and earning them is fun in itself.

You start with three Narrative Points, and may have a few more if you don’t spend all your Combat Gear points when creating a character, or when you’re using superhero rules. So you’ll probably earn 2, 3 or maybe 4 back during a typical game session — enough to keep using them all through the game.

Then again, if the players and game master agree, Narrative Points can be handed out constantly. This creates a game where players are revising the story as they go, as in a fourth-wall-breaking cartoon (Daffy Duck or Deadpool), or boosting every attack and damage roll until heroes are blowing away legions of even very tough bad guys without a sweat (Arnold Schwarzenegger and Sylvester Stallone). It’s all up to the kind of game everyone wants to play. 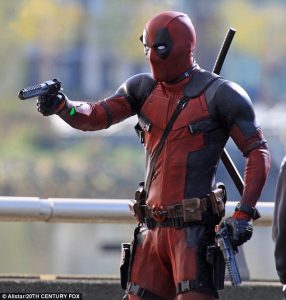 Here’s a few ways to earn Narrative Points in your USR game.

Doing what makes sense for your character, especially when it makes the situation more challenging for the heroes, can be worth a Narrative Point. It should usually just happen once per game session — a character doesn’t need to constantly be rewarded for literally being themselves. Also keep in mind that role playing games are social games about heroes; there’s always someone who wants to be the lone wolf, going off on his own adventure, or who wants to murder everyone in town. In a typical game, that may be true to the character’s personality, but it’s not much fun, and shouldn’t be encouraged by awarding Narrative Points. It probably shouldn’t even be allowed for a character, unless you’re trying to role play “Grand Theft Auto” or something.

Surprisingly, most professionally published role playing games have little to say on their equivalent of Narrative Points. Savage Worlds suggests you earn Bennies for good play. Fate gives specific requirements on how to regain a Fate Point, with its jargon of “compel,” “concede,” and “invoke.” Of the games I own, Toon actually offers the most help (interesting that it’s much older than the other games, dating to 1984). Its ideas are similar to the ones I’ve listed here.

What “cool stuff” would earn a Narrative Point in your game?