That alliterative name is probably all you need to picture this otherwise unexplored Domino Writing-style USR setting. Thank “California Love,” “Car Wars,” the opening of the trailer for “The Lego Movie 2”… oh, and the Mad Max films. So there’s one thing this setting can’t go without: vehicles.

Scott Malthouse’s “Somnium Void” rules are great for the more complex vehicles rules we want in a 4A setting (I just came up with that name!). But we’ll tweak them a bit to bring them in line with the rest of the Domino Writing-style rules. Here are their stats.

Maneuver: The target number needed to successfully perform a stunt that’s above and beyond the regular driving or flying needed to get from place to place. In a 4A setting, water is very rare; there probably aren’t any boats to pilot, and getting into space… forget it. Specialisms like Driver and Cool Under Fire are helpful here, along with the Action die.

In combat, vehicles are monsters ― literally. We’ll use the same guidelines we used for monsters to generate generic cars, trucks, and bikes.

Armor: This is the vehicle’s own armor combat bonus, added to the hero’s Action die roll if they’re hiding behind the vehicle, or driving it as they’re being shot at.

Hit Points: When a vehicle loses all its Hit Points, it’s no longer drivable. A vehicle can regain Hit Points with a successful Wits roll and time ― usually 1d6 per hour in the auto repair shop; 1 point per successful Wits roll when in the middle of a battle. Vehicles can have extra armor bolted on, but something with too many Hit Points takes a frustratingly long time to defeat: no fun in the world of the story, or in the real world. 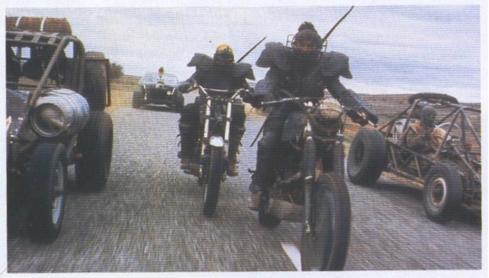 In the heat of the action. (image: informationweek.com)

Chases were described in an earlier post, and they’re a key part of the 4A genre. Essential, even. Grab some toy cars and stick spikes and guns and mohawks all over ’em. The chase rules are written for two “markers” to represent a Pursuer and a Target, but for this setting, don’t just use the simple straight line to show the chase. Add broken-down vehicles as obstacles, and the harsh desert sands. Let the vehicles swerve and skid, barreling toward one another on a last-chance power drive. That’s what the 4A setting is all about!

Last but not least, the best part of all, weapons. A vehicle can carry weapons with bonuses equal to the vehicle’s Armor bonus before it’s too heavy and unwieldy to move. A Small Car (+3 Armor) can have:
A roof-mounted machine gun in a turret +2 and a crossbow +1
A flamethrower +3
A spiked front bumper +1, a shotgun on the door frame +1, and a net that can deploy from the rear bumper +1
Don’t forget about gimmicky weapons like tire-puncturing blades, oil slicks, and the roof-mounted heavy metal guitar player on a bungee cord (not a weapon himself, but definitely a Specialism used in combat!)