We’re putting the Six-Step Adventure design to work, with two different adventure ideas. They haven’t been playtested (yet), but they’re examples of how the adventure design can be used for brief, but still satisfying night of role playing.

Fantasy Adventure: This one takes place in a generic fantasy setting (for example, Halberd or Tequindra). It’s a pretty straightforward “dungeon crawl,” the kind seen in RPGs since the 1970s, and that makes it a good way to try out the format in a familiar context. Don’t forget to add some unique elements to the combat encounters — a battle in an empty room or forest clearing isn’t that exciting, but add obstacles, a time limit and different locations, like a high balcony to shoot down from, or the top of a moving train, and you’re adding to the action.

Defeating the wizard ends the adventure; the heroes can return the treasure to the sorcerer and earn gold and prestige. 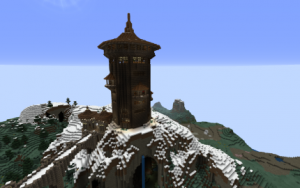 This wizard’s tower is almost exactly what I imagined for this adventure, except not necessarily in Minecraft. (image: Kokotoni)

Modern Adventure: Here’s a story in a more contemporary setting, with a little bit more social interaction. The heroes meet a rival team of explorers, giving them a chance to compete with or cooperate with that group. Killing off the rival team also demonstrates the danger of the adventure, without keeping the heroes from completing the story.

How do these Six-Step Adventures work in your gaming group?