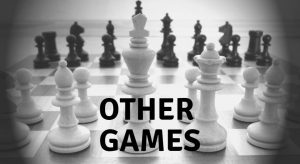 These games are original creations or my own variants of published games.

Agents & Assassins: This supplement for the 4C role playing game (a version of the classic Marvel Super Heroes RPG — the FASERIP one) features action-movie heroes, not as super but just as fun. It was later published as Super Agents by Seraphim Guard Games.

Explosions and Escapes: Recreate the big, dumb action of “Fast and Furious” or the 80s glory days of Arnold and Sly with this quick play game.

How To Rob A Bank: Solo/Co-Op: A solo and co-op variant of Big G Creative’s “How To Rob A Bank.” The game itself operates the Guards, as you try to collect the bags of cash.

Insta-Skirmish: No room for a full-size wargame? No problem! Just a few dice and a chessboard and you’re in the heat of battle.

Risk: Black Plague: Keep the deadly disease from spreading across the planet in this solo take on the legendary Hasbro game. They don’t attack, they just keep growing.

Solo Miniatures: Guidelines for controlling the bad guys while you lead your army to victory.

Westeros Intrigue: Solo: A solitaire variant of the Fantasy Flight Games card placement game. Lead House Stark to dominance over rivals old and new, in a world where anyone can die.

These games are slightly modified and edited versions of games created by others.

Clue: Hide Your Tracks: Keep the detectives off your trail in this one-player inversion of the classic game.

King Of Tokyo: Solo: The humans have recruited a kaiju to their side. Face off against a giant beast in the Pacific Ocean without needing another player.

Lionheart: Schemes: Add the throne room politicking of A Song Of Ice And Fire into your battles between the gold and silver armies.