I’ve been rewatching “Game Of Thrones” recently, in anticipation of the seventh season being released on disc (we’re buying each season as it’s released, and watching it then, so no spoilers). The CG for the dragons is impressive, for the most part, and every time I see them on screen I’m reminded of an old game, the AD&D 2nd Edition “Council Of Wyrms,” which boils down to “Dragons as PCs.” This is full-size dragons, not dragonborn; the character’s scale color stands in for race, and there are mages and priests and so on. I’ve never actually played in the setting, but “Dragons as PCs” is a great way to try the USR rules on an entirely different scale. 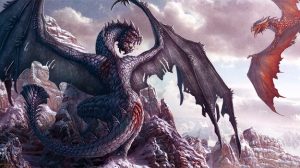 You can make this very picture come to life in your USR game. (image: geek.com)

Dragons are, of course, powerful enough to rule entire kingdoms (as they do in the later “Dragonlance” novels) or destroy armies (as they do in “Game Of Thrones”). How do you recreate that level of power in USR? You could start with the superhero rules, setting them at Tier 4, but the tiers only work with varying levels of power — a Thor vs a Punisher. If everyone’s a massive dragon, take a cue from Risus, and change the scale of target numbers for non-contested rolls, decreasing them all by two points. So it looks like this:

The characters can still fail on a die roll, but it’s a lot harder to do so, since they’re physically and magically utterly powerful creatures. Monsters in this setting are scaled down, too. A single human or elf has stats of D4 and 1 hit point. A party of adventurers out to slay your hero is probably at Power Level I or maybe II. A giant, an actual threat to a dragon, might be a Power Level III or IV creature. The rules don’t change, just the numbers.

Then there’s the adventures themselves. A group of dragons likely won’t be crawling through dungeons, unlocking doors and fighting goblins. Instead, try adventures on a larger scale: