Things really do last forever on the internet. My original website from decade or more ago is long gone. I still have the content on that site (a few miscellaneous blog posts, old games), but no way to maintain the site. Despite it being lost in the wilderness of the internet, people have found those old games, some of which have made it to this site, updated and improved for gaming now. Others are so old-fashioned they’re not really worth a revisit.

Agents & Assassins was written for the 4C role playing game, a variant of the legendary Marvel Super Heroes RPG by TSR way back in the 1980s, known affectionately as the FASERIP system, after the attributes used by characters. 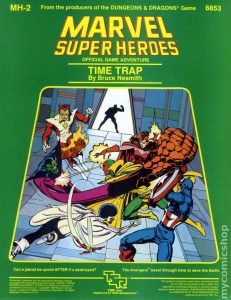 This isn’t the original box cover, of course, but I have this adventure too. That’s the Avengers circa 1984.

I have the yellow basic set in a taped-up box, and the game is actually still alive online. Agents & Assassins goes a little lower-powered, for action heroes like Jack Bauer and Buffy the Vampire Slayer (now you know exactly when I wrote it). There doesn’t seem to be an official TSR book for characters like that, though I’m sure Nick Fury and SHIELD received stats somewhere along the line, maybe in one of the annual handbooks or a Dragon magazine. Agents & Assassins was published by Seraphim Guard Games not too long after it was written, under the name Super Agents, with different art. I have the original here on my site, with some public domain photos as the “art.”

I rebalanced a few of the rules and limited the power list to fit the level of the game; you won’t need anything but Agents & Assassins and some version of the basic FASERIP rules. It even has a game setting, which I didn’t remember creating until I took a look back at the game. I think I’ll keep using the setting in other games of mine going forward.

Nothing ever goes away online, after all.